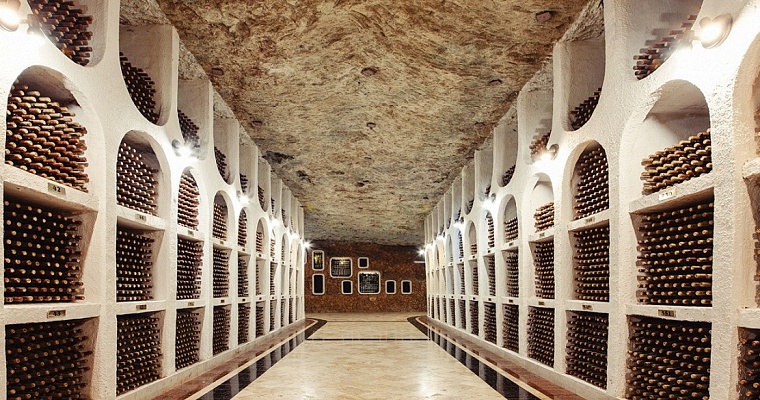 The Largest Wine Cellars in the World!

When discussing the largest wineries in the world, none can compare to Mileștii Mici. It’s located about 12 miles from Chisinau, the capital of Moldova.

Holding over 1.5 million bottles, it’s even the Guinness World Record holder of the title.

Mileștii Mici is located 130-270 feet deep underground inside winding tunnels. These help keep the wine in an environment between 53-57 degrees Fahrenheit along with high humidity.

Having this steady and reliable climate allows the wine to age to perfection. It also helps the winery create some of the most expensive aged wine in the world.

Tourists can drive cars through the maze, and must also follow normal traffic rules. The streets are each named after a certain grape like Cabernet Sauvignon or Pinot.

After touring the cellars, visitors can also sample some of the wines in the cellar’s tasting halls.

Due to the huge tunnel are in the cellar, workers often ride a bicycle to get to the furthest corners of the cellar. Amazingly, the cellar is only utilizing half of the space the tunnels extend to.

It looks like Mileștii Mici will remain the largest collection of wine for years to come!

The cellar has even held 10 km races where hundreds of racers competed, and were then greeted with a glass of wine as they finished!

The Cricova winery, just north of Mileștii Mici, is also an impressive network of underground tunnels. It spans out 75 miles in total and holds about 1.25 million bottles.

The cellar also holds the “National Vinotheque”, which is an exclusive collection of legendary wines including Moselle, Bourgogne, Bordeau and Porto.

Tours in the Cricova winery actually take place via electric trains, very much like golf carts. The tunnels were repurposed from limestone mines in the fifteenth century, and it was during the 1950s that they become used for wine.

The tunnels are similarly kept cool with high humidity as with Mileștii Mici, and also name their streets according to the wine kept there.

Some interesting facts about the Cricova wine include Jewish people hiding in the wine barrels during the Nazi occupation of the Soviet Union.

Vladamir Putin spent his fiftieth birthday in the winery, and in 1966 famous astronaut Yuri Gagarin visited the cellars. He stayed for two days and had to receive assistance to exit. The guide reported, “He found his way into space, but got lost in Cricova”.

The Cricova wine cellar is the biggest producer of sparkling wine in Moldova, using the traditional method.  It also has wine in its collection that was produced in 1902 in just one batch, called Easter Jerusalem.

Whichever tour you decide on, you can expect to be amazed at the expansive wine tunnels, and inspired by the unique wine held there.

If you can’t yet make the trip, check out our website map and see where you can purchase a bottle of delicious Cricova wine today!

3 Tested Ways To Open A Wine Bottle Without A Corkscrew

Climate Change; the End of the Wine Industry?